A few days before the start of this expedition Rajiv Mondkar surfaced on FB messenger with a request to visit his farm house in case I would be travelling on the Surat highway. I do not normally make unplanned detours from a daily schedule unless an emergency warranted it. Besides breaking the momentum it also disturbs the schedule. But Rajiv was persuasive. The warmth of his invitation and the insistence paid off. He agreed to call me up during the course of the expedition to finalise the arrangement to visit his farm, which was on the Maharashtra-Gujarat border. He got in touch when I was on the way to Thane and gave me detailed instructions.


I set off early from Thane after goodbyes to a wonderful couple, Chakochan and Anupa. Within a few minutes of leaving the Thane neighbourhood I encountered heavy rain and the effect of the car wash didn’t even show! I stayed in constant touch with Rajiv and was told that he would wait near the border checkpost. With sparse traffic during the early morning hours I reached the appointed spot slightly ahead of time. Rajiv came there and piloted me to the lovely farmhouse, which was just a few km from the highway. In the hour that I spent with the family in the sylvan surroundings in Bhilad we went from complete strangers to warm friends with Rajeev, his wife and toddler

son, Ayan, father Ashok and mother. Rajiv and his pretty wife are inveterate travel enthusiasts and Rajiv intends to ‘acclimatise’ his son early into the travel habit. He told me about his plan to travel to Leh with his wife and son! Rajiv has also pre-decided the career of his son, whom he fondly refers to as Col. Ayan! Coffee and cookies and many photos later I reluctantly took leave of the family. We agreed to stay in touch over social media.

The next stop had to be Daman where Seju Kuruvilla IPS was currently posted along with his wife Megha IPS. They had been posted in Arunachal Pradesh, where I got a lot of assistance from Seju, when he was Superintendent of Police, Lohit district, headquartered in Tezu. Megha was holding a similar charge of the adjoining district during my visit to Tezu in 2013. Between then and now their loving family has been blessed with the arrival of Meera Rose Kuruvilla. It was not difficult to reach the VIP guest house in Daman. I met up with the affectionate family over tea and snacks. With a brightly decked up car photo sessions are a must before taking leave. So it was in the VIP guest house too. Besides, Seju promised all assistance in Tezu on the final leg of the Trans Himalayan Expedition, which included the Inner Line Permit, River crossing and rest house accommodation.

Hetal and Rajiv Shah had connected with me on Facebook in April 2015 when I was on the return trip of the Cochin-Singapore-Cochin expedition. Rajiv runs an extremely successful travel agency in Surat (Network Tours and Travels). He is the first agent in India to successfully arrange a packaged road trip from India (Surat) to London, which he did in April 2015 for a group of four persons. When I visited Ahmedabad on work in June the lovely couple visited me there from Surat and we became good friends. It is fate that brings such friends into your fold, nothing more can be said. Therefore, it was only natural that I would spend an evening in Surat at their wonderful home during the current expedition.

Before I went to their home Rajiv took me to the clinic of his brother, Dr. Sanjiv Shah, to consult about a bothersome orthopaedic problem, spondylosis. Thereafter, it was a memorable evening with Hetal, Rajiv and his Mummy, whose blessings I took for the expedition, the amazing Upendra Sehgal and informative exchanges with Atulbhai and Dr Rajen Desai, one of the four who had done the London trip from Surat. Sehgal Uncle is a face reader and astrologer. His many observations left me open mouthed and in utter amazement. Atulbhai gave me a hamper of things required for high altitudes like special lubricants and additives. Rajiv presented me with a copy of “With Cyclists Around The World”, the adventure of six people who ventured out in 1923 on cycles to circumnavigate the globe! Truly inspiring for a tough journey like the Trans Himalayan Expedition, indeed. 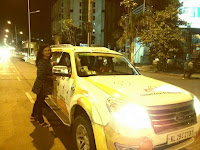 Hetal is an amazing cook. I only felt bad that I could not do full justice to the superb desi fare she had laid out so elegantly on the dining table. The loving hospitality and the effortless ease with which she makes visitors comfortable is her wonderful nature. The dessert, which consisted of almond cake and chocolate sauce, typified the evening – sweet and most enjoyable.

Once the meal was done with we all decided to go for a spin in the car. All of them took turns behind the wheel. The surprise item of that late evening drive was the manner in which Hetal handled the car. She turned out to be an absolute natural behind the Ford Endeavour, which surprised all. To cap the evening she even reversed the car for me to get back to the hotel from their colony! Amazing and astounding, are all I could say. An evening well spent and friendships better bonded.
- April 11, 2016

The room in the Pinnacle Hotel had been extremely comfortable. Last evening I was told that the 84 rooms that the property has are almost...

The Railwayman Who Sold His Maruti
I believe that a smile will help you through the most trying circumstances, for one smile begets another. The journey of my life has been exciting, fulfilling and thoroughly enjoyable. I have got more out of my life than I have deserved and hence, am contended and grateful. I consider it fortunate to have had the most wonderful parents, grandparents and teachers to groom me during the early years. I have a great family consisting of my wife (Beena), my daughter (Maya), her husband (Kiron), their children, Eva and Aaron, and my son (Ajay). My brother (Satheesh) and his family in Cochin as also my sister (Geetha) and her family in the USA are the feathers in my nest.